A few years ago, a small performing arts organization in California was having an identity crisis. They were asking themselves the question: Who are we – really?!

Background
Pacific Crest Youth Arts Organization was founded in 1993. Back then they didn’t want to be known only as a drum and bugle corps, an organization that produced an 11-minute field show with 150 kids who could afford the tuition. They wanted to be more than that, to offer a variety of performing arts education programs for youth.

Their organization structure was fairly traditional. They had four main programs and these programs were supported by operations and fundraising.

But as time went on, they began to notice that they spent nearly all their time working on the drum corps. And that most people thought of them not as a youth arts organization but as a drum and bugle corps.

We recognized Pacific Crest’s lack of clarity as a branding problem, and suggested that for Pacific Crest – and other small nonprofits like them – the benefits to having a strong brand are manifold:

Here’s the four steps we used to uncover and communicate Pacific Crest’s brand:

While this may seem obvious, it’s a critical first step.

The thing about a brand is that we all have one – even if you don’t know it. The key is to articulate it, to control the message. Otherwise, someone else will. But you can’t articulate it unless you know what it is that you want to say about yourself.

DO IT: Ask yourself these three questions

Pacific Crest engaged stakeholders to help answer these questions, above. Surveying their students is an annual process, but this time they also conducted a series of interviews with their board, staff, parents, donors, and high school band directors whose students had been in their program.

Out of this research, we were able to establish Pacific Crest’s five main brand attributes:

We also determined that Pacific Crest is – indeed – a drum and bugle corps. The drum corps was not one of many programs, but rather the program. While there are other activities Pacific Crest engages in, these are all in service to the drum corps. That’s how everyone saw them, and it was clearly where they spent most of their time.

DO IT: What well-established brands do you aspire to, and what is their structure?

Given this new perspective, Pacific Crest changed their structure to better reflect their brand and their business model. The drum corps is now their central focus. It is the core program, and all other business lines add value to that program. In fact, were it not for the drum corps, Pacific Crest would not have reason to do any of these other things.

Once we helped Pacific Crest navigate through this discovery, we were able to clearly articulate their three main brand messages:

Like a lot of nonprofits with limited resources, Pacific Crest relies heavily on both its volunteer workforce and technology to spread the message about who they are and what they do.

In this example, a volunteer at the organization created a simple Facebook campaign to communicate their brand messages. 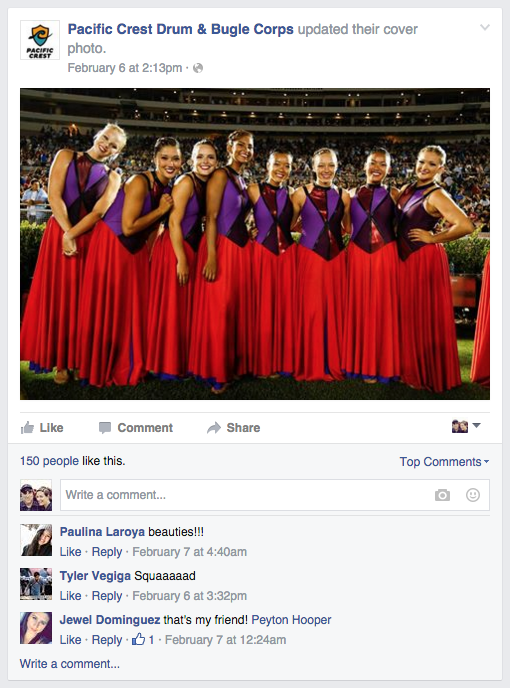 The above post focuses on a group of similarly motivated peers, from Brand Message #1, above. It also demonstrates camaraderie (a core Brand Attribute), the feeling of Pacific Crest as a second family. In this photo you can’t deny how much these young women are enjoying themselves after a performance.

There were several similar posts. While it may appear that Pacific Crest is putting random photos to its Facebook page, each one helps subtly communicate the brand messages.

Knowing your brand enables you to clearly identify your program goals that will create evangelists who help you tell your story which impacts your fundraising and outreach which improves your sustainability.

Using the above four steps, Pacific Crest has been able to define its authentic brand and use it successfully to:

Your network should experience the organization’s brand and infer from it that the organization has the character and values that it actually has. Then people can connect emotionally, which in turn builds trust and loyalty in your organization.