I was supposed to write a final paper for a grad school class, an elective, on Educational Leadership but took a risk and designed and wrote a graphic poster instead.

The assignment  was to read a scenario and respond as if I was a student in the principal preparation program. Which I am very much not – and the professor was aware of that.

The course involved a lot of readings that focused on innovation, the creative process and engaging curiosity. So I felt empowered to do a little divergent thinking of my own. 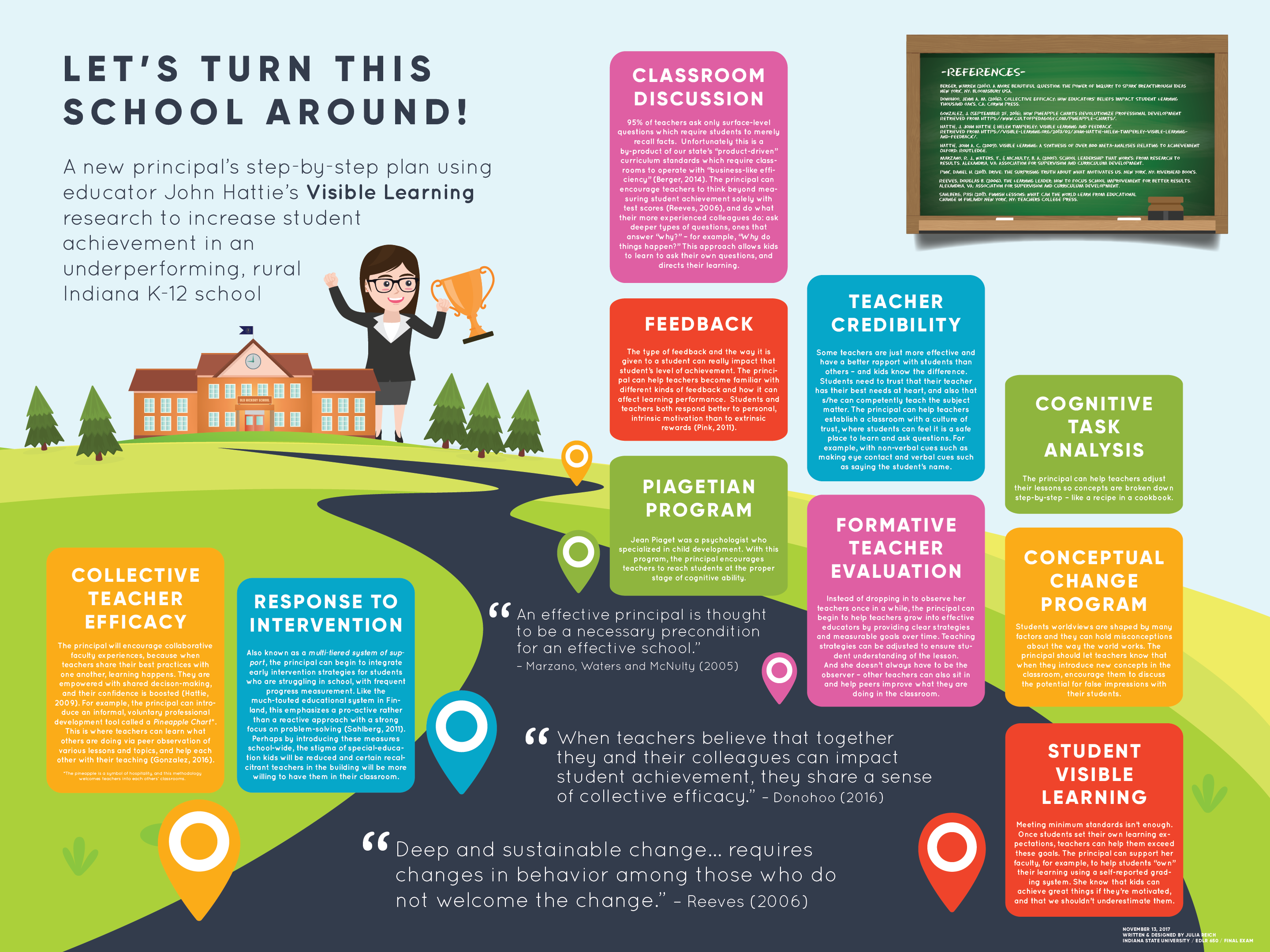 Here was the entire assignment:

It is year two and you have survived your first year as principal at Old Hickory School, a K-12 school located in the deep hills of Southern Indiana. It was been a very long and tough year. Teachers and students have responded lukewarm to all your initiatives you put forward using the 21 responsibilities form Marzano (that just happened to resemble your midterm from that old educational leadership class EDLR 650 you took in the fall of 2016).  Just as a reminder, Old Hickory is a very conservative district. The school has not performed well with state letter grades of C, F, D, F C, D, and F over the past seven years. You are the sixth principal in those seven years. Your attendance rate is 84%. Your graduation rate over the seven years has averaged 51%. The Census data tells you that only 47% of your community has at least a high school diploma and only 2% have a college degree. Your free and reduced lunch rate is 89%. Your teaching staff is very split with 43% of your staff having been here over 25 years while 48% of your staff is in their first or second year. You cannot attract teachers because your starting pay is only $28,000. Also, because of declining enrollment the district has not been able to offer a raise in the last eight years. The district has only 681 students, down from 993 seven years ago. Special education is a disaster. Teachers want nothing to do with RTI. They feel if a student is struggling the student needs to be removed from their classroom. One teacher even says to you,”I don’t what any of those kids in my classroom. I want only good kids. “

You want to make some changes. You tried address the curriculum and instructional program. During observations you continue see only two methods of instruction-lecture and drill and practice. You tried to offer alternatives to inspire teachers and students to stay in the district. You saw this as a need to change the public image of the district. You announced this in a staff meeting. After the teacher union president and the building representatives from the union meet with you and tell you they do not support you making any changes. One teacher says to you, “We have been here a long time and you come in here in your first year and think you know more than us! Well, we will still be here long after you are gone.”

You are very frustrated. Being only in your second year you are still struggling with what your leadership style is. You do not know when to be nice and when to be strong. Some days you want to throw in the towel and resign. You say to yourself these people will never change. Yet other days you believe you can make a huge difference.

Over the summer you read The Learning Leader by Reeves, Mindset by Dweck, The Contrarian’s Guide to Leadership by Sample, Grit by Duckworth, Smarter, Faster, Better by Duhigg, A More Beautiful Question by Berger, and Visible Learning by Hattie. You have decided to use the top ten most effective influences on student achievement by Hattie to turn your school around.

Describe what you will do. What will be your plan? In your response you must incorporate materials from the above named sources and any other material covered in class. You will determine the length of this response. Present this in a step-by-step plan of what you will do first, what follows that, what is the next step, and so on.

PS: the professor loved it and I got an A!